Oooohhh, I am just giddy giddy glad to FINALLY have gotten around to making a puppet theater for the children!! It took some serious thinking, because I wanted something they could play with themselves, too, and since they're still a little young, they would rather be seeing the action played out, than be stuck behind the curtain putting on a show they can't watch. The solution was a table-top theater for stick puppets. 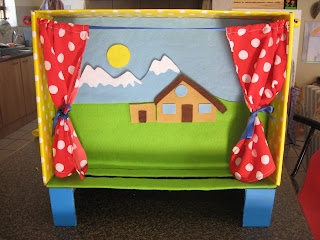 I started with two sturdy boxes, and cut a slit in the side of one. This would become the floor of our stage, through which the puppets are slipped. 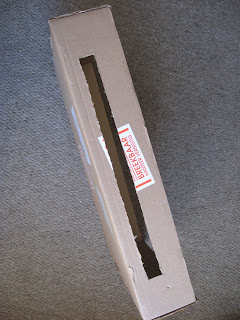 For the background, I used fabric glue to glue down two pieces of felt. I chose felt so that we can later add other felt elements or 'props' to our background depending on the play we are putting on! The bottom of our stage got the same treatment, making the slit I cut in earlier, nice and smooth for the puppets to glide back and forth. I then covered the sides and back of the box in some fun polka dot gift wrap. 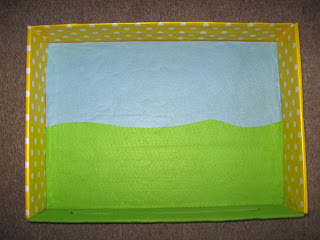 Next, I attached the first box (i.e. the stage) to the second box, which would serve as its stabilizing base. This also allows us some space to fit our hands in under the stage to manoeuvre the puppets. 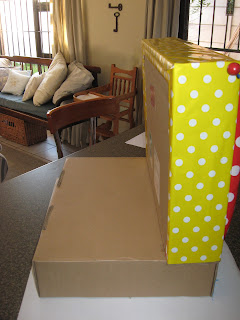 The curtain 'rail' is just a length of ribbon strung across the top of the stage and secured on the outside with two wooden beads. 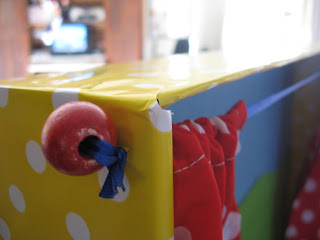 I painted the base blue, and sewed some ribbon ties to the curtains to keep them in place while the show is on.
Our first set of puppets were hand drawn and coloured by yours truly, and then popped through the laminator and glued onto popsicle sticks. The characters are from the 1970's Japanese Anime version of Heidi - this was one of the first children's shows on South African television and the first TV program I can recall watching. So last year my mother gifted my daughter with a set of DVD's of the first 25 episodes, and Heidi is now about as much part of our family as any of the actual flesh and blood members!!
Here are the characters: 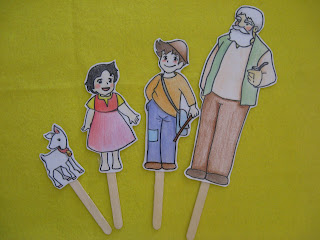 And here they are on stage, with some felt props in the background!! 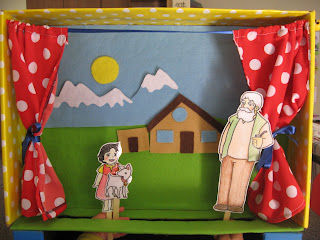 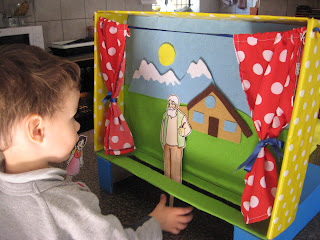 I also found these printable Community Helpers  which we printed, coloured and laminated. Will keep you posted as our repertoire of shows grows!! 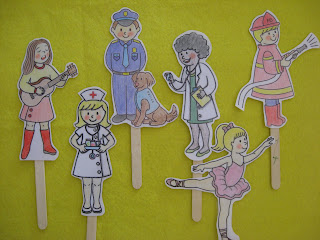 Linking this to ABC and 123's Show and Tell! and All things Wonderful at My Shae Noel
Posted by Joyfulmama at 7:25 AM

Email ThisBlogThis!Share to TwitterShare to FacebookShare to Pinterest
Labels: mama-made toys, we play

I love to hear from you and appreciate your comments! I will try my best to reply here to each comment promptly. Have a beauty-full day!